In comparison with Europeans, Georgians do exercise almost 6 times less

Physical exercise and sport are the main themes of this article. We surveyed 500 people and found out, how intensely they are involved in sports.

It turns out that Georgians aren’t very active sports-wise – only 5,2% of the respondents works out systematically, while 80,6% aren’t involved in sports at all. 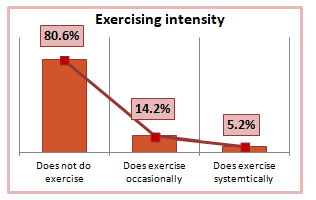 These stats are very different from those of European countries. According to Eurostat (http://ec.europa.eu/eurostat) a third (29.9%) of adults over 18 who live in European Union countries is actively involved in sports/exercise (spends over 2.5 hours on moderate-intensity physical activity per week). Only about half of population (49.8%) isn’t involved in any kind of sport. 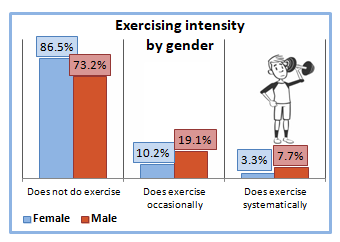 Men spend about 43 minutes on average working out at one time, while women spend 10 minutes less on average – 33 minutes.

In every age category, more men exercise actively than women. Also, it turned out that for both sexes, exercise/sports are at their most popular between ages 18 and 24.