Every 4 th Georgian wants to live in another country

Out of surveyed countries
Azerbaijani want to live in another country the least.
Germany and USA are the most desired
countries for Georgians. 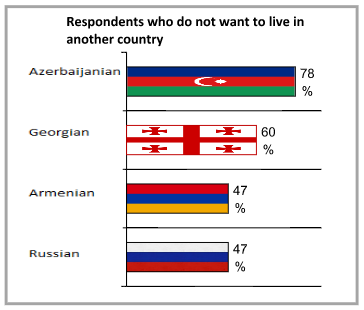 Among surveyed respondents, the majority of Azerbaijani name Russia (4%) and Turkey (4%) as desirable destinations for taking up residency, Armenians named Russia (12%) and USA (11%), while Russians named Germany (6%).
In general, the number of Georgian immigrants has started to decline in recent years. According to GeoStat’s data for the last three years (2014-2016) the flow of immigrants leaving Georgia is rising but as a result of other countries’ citizens leaving the country, not Georgians. (Source: Georgia’s 2017 Migration Profile http://migration.commission.ge/files/migraciis_profili_2017_a4_new.pdf). The country with the largest number of Georgian immigrants is Russia. Though this is not the country to which majority of Georgians would like to move to live.

The survey conducted by IPM shows that among those Georgian respondents who would use the opportunity to move to another country on permanent basis (24%), only 3% voiced desire to move to Russia. While 5-5% of Georgians say that for them Germany and USA are the most desirable destinations for living. 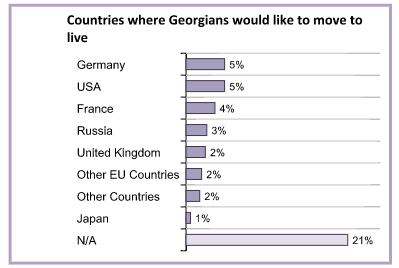 Various sources are in agreement with the tendency revealed in the scope of the survey. According to the Government Commission on Migration, in the year 2016 most applications for asylum by Georgian people were for Germany - 3,448, almost half of them. Also, according to UNHCR data, the number of asylum applications made by Georgian people in Germany and USA has significantly increased in the last five years (2012-2016).