Most people trust the product made in Germany

Unlike the global survey, this survey results show that
Russia is perceived as one of the most reliable
producer country in Moldova and our region

Goods from which countries do you prefer to buy, which do you trust the most? As the result of the survey conducted in region, Russia and Moldova it turned out that most people trust German-produced goods. 1200 people in each country responded this question.

Among the surveyed countries Moldova is the only one where most respondents (31%) say that there are no producer countries they would trust. Most of the other part of respondents, who named any country, would purchase goods made in Germany (27%).

The same goes for Georgians (44%) and Russians (28%) who trust the quality of German-produced goods.

The countries which goods Georgians prefer to buy the most are as follows: Germany, Russia, USA, Japan and France.[1] 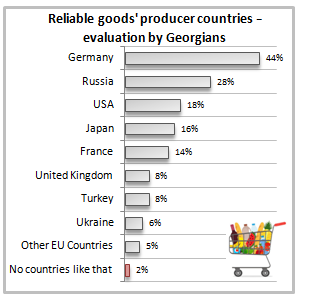 Ultimately, surveyed countries trust the most German-produced goods. After Germany goes Russia. Among the most reliable producers named by participant countries are also France, USA and Japan. 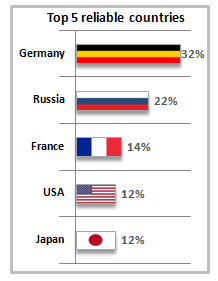 Not only is Germany the most reliable producer country in the scope of this survey but it has high quality goods producer image in a much larger scale as well. In 2017 the similar survey was conducted by Statista (the statistics and market research firm) in 52 countries. As a result of this study, Germany was named as the most reliable producer country by respondents (Source: https://www.statista.com/page/Made-In-Country-Index). Among top 10 countries are Japan, France and USA while Russia did not fall into this ranking.