Tobacco consumption is banned in closed buildings in Georgia. May 1, 2018 will be marked in a history as a very important day in terms of healthcare.

Georgian media actively covers a new law on tobacco restrictions since 2017 as soon as the possible date of the law adoption was announced. Consequently it is not surprising that in January-May 2017 tobacco sector was more actively covered in media than in the analogous period of 2018, when the law came into force. 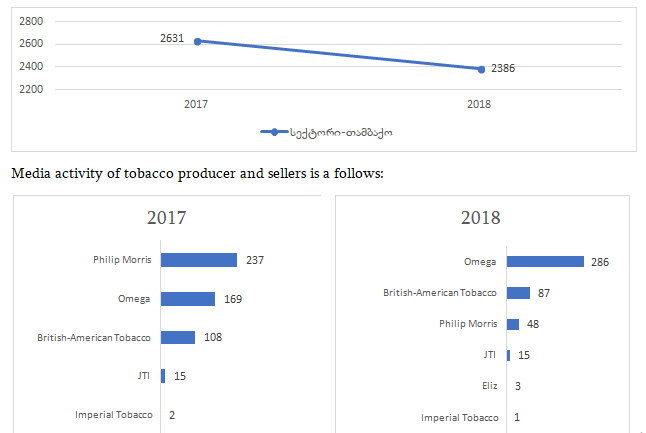 In both cases one and the same companies occupy the first 4 leading positions. The significant news for tobacco sector players in 2018 is a follows:

Diversity of Omega group preconditioned its first position in media activity. Tobacco sector is one of the directions of the company. Last year Omega Group was named as a major investor by Gorbi and Georgian Times.

After investing billions of USD during 10 years and conducted surveys a real alternative appeared for a traditional cigarette. This is IQOS. Daily 10 thousand people give preference to it in the world.

During 4 years almost 5 million people of 35 countries selected it. Philip Morris is an author of the transformation. The industry is working on heating tobacco for dozens of years but several years ago a product appeared that met the requirements of smokers. IQOS is manufactured by Philip Morris.

Japan Tobacco International once again was awarded as a Top Employer for offering the best working conditions to its staff. This time the company became #1 employer in Georgia, Europe and Asia